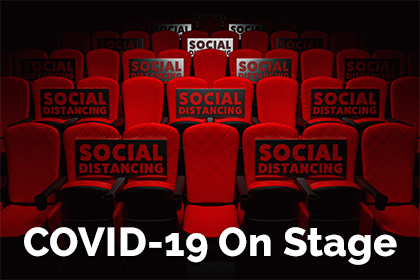 There's great news coming... There are positive signs that Live performances are returning to Broadway and Regional theaters. So get ready A4Ders. A team of solution seekers at Answers4dancers continues to provide the information you'll need to be ready when new opportunities arise... Knowing what to expect will give you the edge you need to succeed!

The protocol for theater auditions in the age of COVID-19 social distancing has evolved. Drawing on examples from other theaters and producers, Equity recently highlighted five COVID-19 tests that meet its criteria and have been proven to show few false negatives, as well as few false positives. These approved tests are the ones that will be used.

Actors’ Equity Association (AEA) is the nation’s union for stage actors and managers. They are working hard to ensure the safety of their members. With that in mind, any theater or producer wishing to reopen with Equity members will first have to submit a health and safety plan for approval by the union.

The good news is AEA recently approved productions at Barrington Stage Company and Berkshire Theatre Group. The two theaters, both located in Massachusetts, were the first to have productions approved since theaters shut down in March. These guidelines have helped pave the way for additional performance approvals. 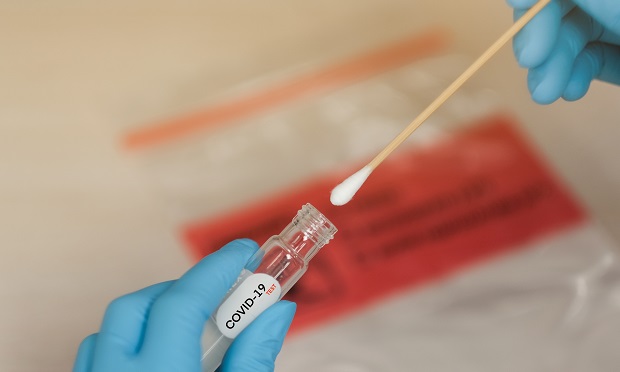 “Every production is different and will be evaluated on a case by case basis focusing on the safety of our members,” Mary McColl, executive director of Actors’ Equity, said in a press release. “We will continue to collaborate on safety plans where the epidemic is under control and where employers can maintain a safe work environment for their employees.”

AEA has retained safety consultant Dr. David Michaels, who served as the administrator of the Occupational Safety and Health Administration (OSHA) under former President Barack Obama, to advise the union to develop the steps necessary for reopening Broadway and theaters across the country. Dr. Michaels joined AEA President Kate Shindle and Executive Director Mary McColl in presenting four core principles that need to be met before theatrical productions can resume safely.

The first principle is that the epidemic must be demonstrated to be under control. According to Dr. Michaels, this means that there is  extensive testing widely available and very few if any new cases are being identified in the area where the theater is. Assessing specific numerical goals is one of the next steps being prioritized in AEA's collaboration with Dr. Michaels.

The second principle is that individuals that may be infected must be identified and isolated per the coronavirus health and safety guidelines. This too will rely on the accuracy and availability of COVID-19 testing, not only for audience members but for those making a production happen, from performers to the production crew to the front-of-house staff.

The third principle is that theatrical venues must be modified to minimize exposure. Even when few new cases are being identified and testing becomes widely available, a spike in transmission and new infections can occur at any point in time. Accommodations will need to be made to enable participants to maintain social distancing and sanitary practices; this may include expanding or reconfiguring dressing rooms to ensure adequate physical distance, as well as alternative approaches to audience seating, entry and exits. Plans should be made to designate an area for isolation if and when a member or other employee reports symptoms.

Finally, the fourth principle is efforts to control coronavirus exposure must be collaborative. Though it is still too early to develop production-specific infection control plans, when that does happen, all participants must agree to follow the new rules and work to continually evaluate and improve them. If all the participants aren’t committed to the plan’s success, it is unlikely to succeed. 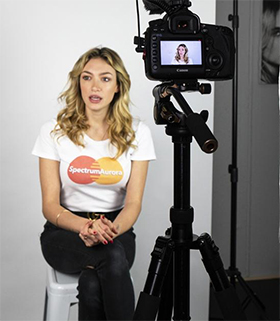 Equity principal auditions (EPAs), producers and casting directors may solicit video recorded auditions through the union’s online membership portal under the “submissions” tab. Video recorded auditions can only be reviewed by the officials directly involved with a project’s casting decision making. According to temporary union protocols, once the employer considers the recordings, the footage must be destroyed to prevent it from circulating further.

Productions working under an Equity contract must call back at least five self-submitted union members or one self-submitted member per role, depending on which amount is greater. The Advisory Committee on Chorus Affairs is still determining Equity Chorus Calls (ECCs) video audition protocols.

A union official says a recording of the 80-minute seminar on video auditioning will be posted imminently in the membership portal once in-house closed-captioning transcription is complete.

When it comes to callbacks, they must be held in-person—whenever it’s safe to do so, the union specifies. And, once in-person conditions are safe to return, the union plans to limit video auditions.

Actors’ Equity has traditionally been very strict about limiting video-recorded content for auditions and performances, as there could be some jurisdictional overlap with SAG-AFTRA, the union for media actors. Such an overlap was highlighted during an early May press conference with several entertainment unions, including the two actors unions. “Work by professionals in front of a camera is SAG-AFTRA’s jurisdiction,” said David White, SAG-AFTRA’s executive director during the May press conference. “We don’t have a question about our jurisdiction.”

However, in light of governmental sanctions on large in-person gatherings nationwide, the unions have embraced a stance of cooperation, and Equity has loosened some of its hard-line policies on recorded content, from auditions to streaming performances.

Recently, SAG-AFTRA, along with other Hollywood unions, published a guidebook of recommendations for the restarting of film and television production in California and New York state. Among the recommendations was an emphasis on video auditions and, if in-person auditions or callbacks were absolutely necessary, the actors would need to be separated from the observers by a plexiglass barrier. If two SAG-AFTRA actors were auditioning in-person together, they would need to belong to the same household (not necessarily an uncommon scenario for actors who often have roommates).

With COVID-19 cases controlled or low in the region, AEA has approved shows for the Weathervane Theater in New Hampshire, Music Theater of Connecticut in Norwalk and Northern Stage in Vermont. The Weathervane plans on producing a comedy called Miracle on South Division Street, the Kander and Ebb musical revue The World Goes ’Round, and a seven-actor version of Little Shop of Horrors with limited contact between the performers—meaning Audrey and Seymour will not be able to kiss.

The 266-seat venue will only have 44 seats for sale. The theater company owns a 62-room inn that normally houses actors; over 20 staff members and performers have been quarantining there since June. Masks will be required for patrons as they move through the theater but optional when audience members are seated and socially distanced.

Northern Stage will present the one-woman show It’s Fine, I’m Fine, an autobiographical play about career-ending soccer concussions, written and performed by Stephanie Everett. Only 44 masked audience members will be allowed into the 240-seat venue.

For the approved performance at Barrington Theater, the amount of detail within the rules, regulations, and guidelines were put in place to ensure the safety of everyone involved. Each member of the team was tested for COVID-19 every Monday. Actors had to arrive on location two weeks early to self-quarantine. Only four people were allowed into the rehearsal room on the second floor and all through separate entrances to limit contact even further. They were met with a sanitation table.

The four members of the team were required to take their temperature, do a pulse-oximeter reading, place those items in a 'dirty' bowl, then while wearing rubber gloves, clean them with Isopropyl rubbing alcohol and hydrogen peroxide solution, place them in their corresponding bowl for the next person to use, and finally, record in a Google document, their temperature, pulse-oximeter reading, and state whether or not they were exhibiting any other symptoms.

Everyone was required to wear a mask when moving throughout the building, hand sanitizing stations were set up at every turn, and gloves were also available to wear. Social distancing continued to be upheld in the rehearsal room. Actor were only allowed to remove their mask once inside the rehearsal room.

CHANGES TO THE BARRINGTON THEATER 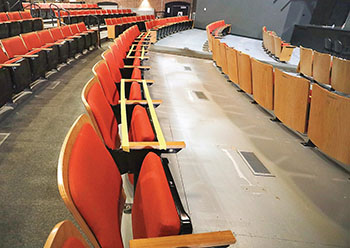 There were changes made to the theater itself included pulling out every other row of seats (bringing the seating capacity down from around 500 to around 150), sectioning off seats to allow for proper distancing between them with groups of only two or three being allowed to sit together.

There were also upgrades made to their HVAC system to allow for the best air quality possible, and then preparing to do a 100% purge of all of the air in the building after a show; using an electrostatic sprayer to clean every touchable surface in the building; and in the restrooms, replacing faucets, paper towel dispensers, soap dispensers, and more with touch-less systems.

There would be no paper programs or tickets, credits and bios would be projected onto a screen; and information would be taken on everyone buying tickets for potential contact tracing. The stage itself was set up to allow for around fifteen feet of distance between actors and the front row.

Here is what the audience can expect. Details here.

This information is designed to equip you with general information of what to expect on stage. Each production may require additional modifications. We recommend you review complete guidelines from ACTORS' EQUITY's website so you will be as prepared as possible.

WATCH FOR NEW DETAILS & UPDATES TO THIS INFORMATION.