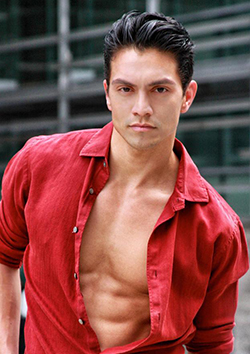 Antonio reflects on the project: I feel that now more than ever, Latinos of ALL ages, shades, genders, nationalities, and sexual preferences need to be seen, heard, and celebrated AUTHENTICALLY! Our diversity and colorful stories need to be represented accurately on TV, film, commercials, stage, AND in politics.

My hard-working Latino parents have taught me to live AUTHENTICALLY ... as both a Latino AND as an American. So I continue to work toward my dreams with pride, love, and gratitude.

I am so proud ... proud and hopeful that people finally see Us. The more we can show Latinos in a variety of different lights, the more I think as Latinos, we can rise together. But I also think there will be more of an understanding from others outside of the Latino population.

BEHIND THE SCENES: HOW DID ANTONIO BOOK THE NISSAN COMMERCIAL?

We were curious how Antonio found work during the industry shutdown. He shared the details with us:

It was a self tape submission shot in my home … I had to be mindful of the camera lighting and the frame and the audio while hitting all of the bullet points that casting wanted me to discuss.

Then I edited it in iMovie and submitted it as soon as possible! It’s definitely ‘first come, first served’ for Casting Directors in LA at the moment! The callback was a Zoom meeting with the casting director and the commercial director. It was very conversational … The director just wanted to get to know me better. I booked the job the next day!

Just a note … I felt very safe while shooting this commercial. Production went above and beyond to help me feel more comfortable. I believe that because of COVID-19 and all of its new guidelines, TV production companies, commercials, and films have to be more streamlined now. They have to be better at time management, so in a very odd way, the pandemic has made Productions more organized overall.

As featured in the August 24, 2020 DanceBlast: 'Antonio's Books During Quarantine'

Answers4Dancers was excited to learn that long-time member Antonio Martinez booked a music video during quarantine. It's been a while since we've posted a member booking... But we weren't surprised to see that Antonio would be one of the first to work in the midst of the pandemic.

We contacted Antonio to talk about the project. How was this possible during the industry lockdown?

In true Antonio form, the conversation shifted from the story behind the booking to his professional philosophy leading up to the project. Ask anyone who's worked with Antonio, from his agent to TV directors... they all seem to have the same comment: 'He's so easy to work with and always available. He communicates well and is ready to help at all times.'

Antonio has always been a generous dancer. He's cultivated a reputation that he's a pleasure to work with and always willing to fulfill the vision of creatives. When appropriate, he very respectfully makes suggestions, and many times, becomes part of the creative process. He's done this countless times throughout his career.

There's a great story behind the Ice Box film... How Antonio helped director Desi Jevon conceive, choreograph, and shoot it in just one day. The film features Antonio's quarantine roommate Courtney Parisi making it possible for the close contact. You can read the rest of the story after watching the video...

HOW THE PROJECT CAME TOGETHER

With the industry shutdown, many teachers and choreographers have been offering virtual classes. Having worked with choreographer Desi Jevon on several projects, including Showtime’s Penny Dreadful: City of Angels, Antonio signed up to take Desi’s class online. Antonio liked the choreography and he had an idea…

He contacted Desi and respectfully asked his permission to share some creative ideas he had about the choreography he learned in class. Desi was interested, and luckily had already desired to create something similar, so the timing was perfect.  Already being on similar pages artistically, Antonio and Desi quickly made moves!  Antonio’s quarantine roommate and dance partner Courtney Parisi was the perfect choice to join the project.

The foundation had now been laid with Antonio as featured dancer, and Desi as the director, choreographer, videographer, and editor. Desi set up space at The Athletic Garage Dance Studio for filming. Antonio and Courtney rehearsed with Desi and the entire film was shot in one day. Desi and the entire team kept safety in mind, so the project was shot within the pandemic safety guidelines.

Desi’s choreography was originally conceived as an online class… It evolved into a stunning dance film when three talented dancers found a way to create during the coronavirus shutdown.

By developing relationships over the course of his career, this project really paid off. Antonio took a chance and approached Desi with an idea. Desi knew Antonio and trusted they could collaborate to create something uniquely beautiful.

By making himself valuable on past jobs and by taking a chance now, Antonio helped create an opportunity... even in the midst of a pandemic!

Antonio Martinez has an enviable list of credits throughout his career. Antonio is repped by McDonald Selznick Associates, (MSA) and has booked an impressive list of TV appearances and National commercials. He's been seen on The Masked Singer several times, performed on The 2019 Billboard Music Awards with Taylor Swift, was seen on America's Got Talent, performed with Jennifer Lopez, Derek Hough, and Ne-yo for World of Dance, appeared on Showtime's Penny Dreadful as a featured Pachuco dancer in multiple episodes.  He has been seen on New Girl, The Ellen Show, Gilmore Girls, Jane The Virgin, Speechless, and Dancing With The Stars. His national commercials include Old Navy, Dove Body Wash, Cadillac, and Dodge with Will Farrell. Some recent stage credits include La La Land Live at the Hollywood Bowl and the International Tour of West Side Story.

As featured in the May 13, 2019 DanceBlast - Antonio performs with Taylor Swift

My definition of "LUCK" is preparation meeting opportunity. And A4D was a major key to creating my "LUCK". With audition notices and info I've gotten from A4D, I was able to create several effective demo reels which then landed me my 1st dance agency MSA in Los Angeles, a national SAG commercial, a guest entertainer contract, and things haven't slowed down for me since then!! I hope my story inspires dancers to make their own "LUCK". Visit Antonio's web page that MSA created for him at www.msaagency.com/antoniomartinez/